The following is a post from a guest writer to the NERRds! This is the first in a series about an investigation into the effects of sunscreen on oysters conducted by Madison Toonder.

Madison is a 10th grader from FL who attends Stanford University Online High School. She aspires to be an exotic/marine animal veterinarian with a focus on conservation of endangered species. In the pursuit of this career, she conducts scientific research on the oyster, sea turtle, alligator and pangolin with scientists across the world and competes in science fairs up to the national level. Two years ago, she was named second in the nation in STEM mathematics by Broadcom Foundation for her environmental oyster data. She has been recognized by NOAA for “Taking the Pulse of the Planet” and was a recipient of the 2016 Sea World Busch Gardens Environmental Excellence Award. At Stanford OHS, Madison is leading a social media conservation initiative with SeaWorld MyActions as a part of Student Service Board. This year she founded the Pre-Veterinary Club in order to connect aspiring veterinarians and encourage conservation. In her free time, she regularly volunteers at a veterinary hospital where she assists in patient diagnosis, care and surgery. In addition, Madison interns at the Brevard Zoo as a zoo teen and conservation representative; she routinely handles exotic animals such as the Ball Python, Red Rat Snake and Northern Blue-Tounged Skink. Madison is constantly expanding the reach of her conservation message by speaking at numerous environmental events and writing conservation blogs (see links below). She has served as a panelist at Brevard Zoo’s Youth Environmental Summit and FLVS’s “Virtual Voice” for the past three years. Most recently, she was selected as key note speaker for GTM NERR’s “Friends of the Reserve” event.

Oysters are earth’s water purifiers; they naturally filter bay water, provide shelter and diet for a variety of organisms in the estuary and indicate water quality. About 50 gallons of water can be filtered per day, consuming phytoplankton and improving water clarity in the process. Even after life, oyster reefs – formed by aggregations of shells – continue to support hundreds of organisms. The shells of dead oysters and the calcium they hold attract oyster larvae, leading to the growth of future oyster generations.

Throughout my life, I have been passionate about environmental awareness, education, and research. While attending an educational Busch Gardens camp in the summer of 2014, I learned that the park utilizes oysters to naturally filter their bodies of water. I soon researched more about the oyster and learned that worldwide populations are in decline partially due to pollution. Various pollutants like fertilizer, fossil fuels, micronized chemical sunscreen, physical sunblock and waste runoff are encroaching into our ecosystem and affecting all forms of life.

I soon realized that this concept was very under-researched and required more experimentation so the public could be more knowledgeable about how these products may be impacting our environment.

I was immediately inspired to assist the cause and went to work developing a research plan to investigate the effects of certain pollutants affecting the oyster. While determining which pollutant to test, I realized that the sun protection sprayed on our bodies before entering the water could be washing into the surrounding environment and negatively impacting oysters.

Due to increasing consumer demand for lighter, less oily, clear sun-protection, manufacturers are nanosizing sun-protection ingredients to meet these growing needs; therefore, microscopic residue is being introduced into the environment, potentially harming humans and marine life. Based on my newfound knowledge and passion to help the oyster population, I formulated an experiment to investigate the effects of micronized (spray) sunscreen and nanosized zinc oxide (cream) sunblock on the ability of the oyster to filter bay water. 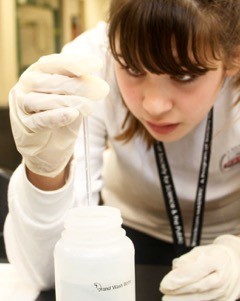 I began a search for mentors and discovered the GTM NERR after becoming familiar with their estuary programs and reached out to Mr. Mathew Monroe regarding potential mentorship. To my surprise, he responded and welcomed me to meet him and have a tour! It was purely awe-inspiring to meet people who were working on something I was (and still am) passionate about – the environment. 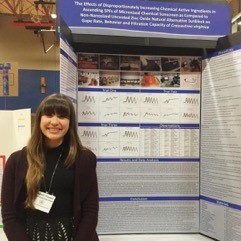 I will forever be indebted to GTM NERR for not seeing just a 13-year-old girl, but a determined aspiring researcher. Without the support of the NERR, my ground-breaking idea would not have even gotten off the ground.For two consecutive years, I researched the effects of chemical active ingredients in micronized chemical (spray) sunscreen, nanosized zinc sunblock and non-nanosized zinc oxide sunblock on the oyster and discovered how harmful micronized products are on these bivalves …

Don’t miss out on the next installment where we dive deeper into Madison’s experiment!

Some other blogs where Madison has been a contributor: