The following is a guest post from fellow NERRd, Kaitlyn Dietz! You may recognize the name from her Shuck and Tell series this past year on the blog (also, conveniently, her office is 50 steps away from ours).

We’re so excited to have her back with another fabulously NERRd-y series on her adventures working with sea turtles. Hope you enjoy and don’t forget to subscribe to never miss a post in the future! (Psst, just scroll down to the bottom of this page!)

Kaitlyn Dietz is currently the Coastal Training Program Specialist at the GTM Research Reserve. Kaitlyn attended Georgia College and State University for her B.S. degree in Biology (2012). Afterwards, she moved to Jacksonville to pursue her M.S. degree in Marine Science from Jacksonville University (2015). Her research focused on understanding relative foraging locations of loggerhead and green sea turtles using the carbon and nitrogen stable isotopes from eggshells. She has been at the GTM Research Reserve in many capacities including being an Environmental Educator under the Education sector, the Usina Oyster Intern under the Research sector, and the Oyster Condition Assessment data analyst under the Northeast Florida Aquatic Preserves.

I grew up in Georgia. Not the coastal part of Georgia, but the landlocked, no ocean breeze part. So, when I graduated from Georgia College with my B.S. in biology and decided marine sciences was the path I wanted to chase, I picked myself up and headed to the coast. I began my Master’s program at Jacksonville University. Had it not been for the courses and opportunities there, I wouldn’t be able to make my landlocked friends and family jealous or enjoy so many volunteer opportunities and my job every single day.

Graduate school was a blank slate. I wasn’t sure what I wanted to do exactly, but I knew that my research had to involve sea turtles.  Incubation temperatures? Migration? Could I just swim with them…? (I eventually did in the Galapagos!) Although I was not sure in what to focus on, I knew something would shine through. 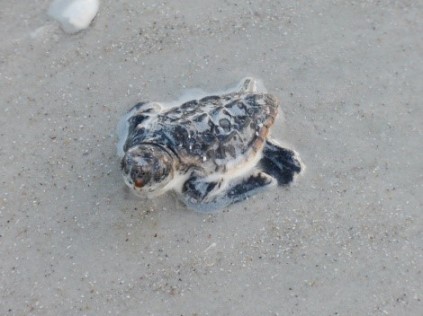 Loggerhead sea turtle hatchling that was found at the bottom of the nest during a nest evaluation. Source: K. Dietz

Sea turtles have always fascinated me. The species has sustained for over 150 million years (thank you, fossil records) while threatened by birds, raccoons, wolves, commercial and recreational fishing, marine debris, artificial lighting, illegal harvesting, beach erosion, coastal armoring, oil spills, and climate change! (*Take your deep breath here.*) There are seven species that migrate vast distances while crossing international boundaries and consider five different habitats home: beaches, brackish waters, nearshore waters, coral reefs, and the open ocean. The only time sea turtles come ashore is when they nest, which they do every 3-4 years. Within a single nesting season (which in north Florida is May 1st to October 31st), females come to shore 4-6 times to nest, each time laying 70-130 eggs, depending on the species. Of those eggs that hatch, it is estimated that only one out of every 1,000 hatchlings makes it to reproducing adulthood! You can see why I love them so much, right? But back to graduate school… 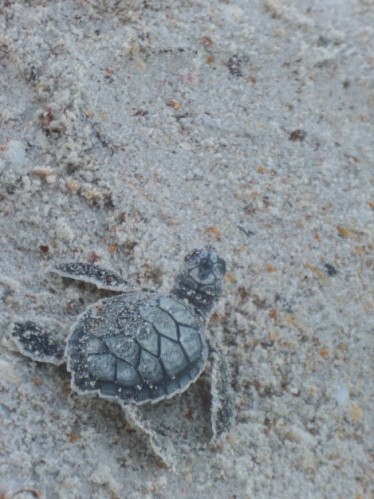 Green sea turtle hatchling that was found within the nest during a nest evaluation. Source: K. Dietz

Never would I have thought that my thesis advisor would be a geologist and that I would have to think with a chemical mindset (OChem1 and OChem2 were enough). After back and forth brainstorming sessions, we decided that a research project the northeast Florida region could benefit from, which would include sea turtles, would be studying the migratory regions of our nesting sea turtles. Our approach was going to be non-invasive, as to not affect the sea turtle population, and be done with very little cost. The research project would determine the relative foraging regions of nesting females using carbon and nitrogen stable isotopes from hatched eggshell material which was collected during regular sea turtle evaluations.

* Both species in the photos (Loggerhead and Green sea turtles) were used for my graduate research project.