The GTM is special for many reasons but one that makes it particularly unique is its location.

And with great [location] comes great responsibility (thanks, Spiderman).

Located right on the boundary between the tropical and temperate zones, our estuary is considered to be an ecotone, or “transitional” zone (think awkward teenager). And by being the awkward teenager of estuaries, we are provided with the opportunity to be in a perfect location to watch changes happening firsthand.

One major change that we NERRds are concerned about is rising temperatures. Being in a transitional zone, we are the first to see changes in our marsh environment associated with rising temperatures. One of those changes that has historically been widely reported is the expansion of mangrove trees. These “new” neighbors that have been popping up in our marshes in northeast Florida can mean many different things for our ecosystems.

Mangroves are primarily limited by their temperature tolerance. So, with rising temperatures (and fewer cold winters), they are able to spread further north into primarily Spartina-dominated marshlands. Although this poleward migration of mangroves has been well documented, little is actually known about the differences between Spartina and Mangrove root structures and belowground processes.

Belowground processes play a large role in our marsh structure and changes in the areas of root dynamics and temperature could have a big effect on what our neighborhood marsh looks like going forward. For this reason, the GTM will be participating in a project called “WET FEET” or Warming Ecosystem Temperatures (in a) Florida Ecotone Experiencing Transition.

Phew, that is a mouth full.

This is where I come in.

As the on-site person for the project, it has been my job to start scouting out possible candidates for our study. Checking out our new mangrove residents has proved to be a bit more complex than simply looking out a window with some binoculars. 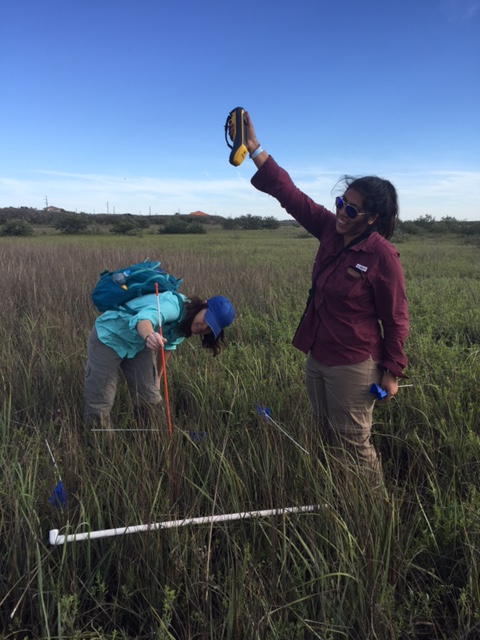 It has involved quite a bit of trudging out in the marsh, getting muddy, interesting shallow water boat maneuvers through creeks and lots of lady liberty-esque acrobatics with the Trimble GPS. I have even “played” a frantic game of Marco Polo to find a lost walkie-talkie in the marsh. But, after all that, we finally have our sites selected for the warming chambers (aka greenhouses) that we will be installing out in the marshes within the GTM Research Reserve.

For three years the WET FEET team will measure and compare root growth, root biomass, above-ground biomass, decomposition rates, and surface elevation among plots with and without warming chambers. All this to investigate how warming temperatures and invading plants alter marsh elevation at sites along Florida’s east coast. That’s right, along Florida’s east coast. The GTM Research Reserve is only one stop in this much larger project.

So as we continue to keep an eye on our changing NERRborhood I’ll be sure to pop in from time to time to keep you all updated!

Gabriela “Gabby” Canas is currently working at the GTM Research Reserve as a Researcher and Environmental Educator. Gabby attended the University of Florida where she received a B.S. in Interdisciplinary Marine Sciences (2016). During her undergrad she participated on a number of research projects that focused on climate change and coral reefs. Now at the GTM she studies climate change in a different capacity by working primarily as the onsite researcher for the WETFEET project. Her work as an environmental educator in the GTM’s education sector allows her to share her passion for science and research with the public