The following is a guest post from fellow NERRd, Kaitlyn Dietz! She continues her fabulously NERRd-y series on her adventures working with sea turtles and stable isotopes. Hope you enjoy and don’t forget to subscribe to never miss a post in the future! (Psst, just scroll down to the bottom of this page!)

Kaitlyn Dietz is currently the Coastal Training Program Coordinator at the GTM Research Reserve. Kaitlyn attended Georgia College and State University for her B.S. degree in Biology (2012). Afterwards, she moved to Jacksonville to pursue her M.S. degree in Marine Science from Jacksonville University (2015). Her research focused on understanding relative foraging locations of loggerhead and green sea turtles using the carbon and nitrogen stable isotopes from eggshells. She has been at the GTM Research Reserve in many capacities including being the Coastal Training Program Specialist, an Environmental Educator under the Education sector, the Usina Oyster Intern under the Research sector, and the Oyster Condition Assessment data analyst under the Northeast Florida Aquatic Preserves.

I mean to teach you chemistry. Just kidding, but we are going to focus on the basics of the carbon and nitrogen elements.

Starting off, an atom (the picture over there) is composed of your protons and neutrons within the nucleus and has electron shells around it with electrons, which are those rings.

On your periodic table, there is an atomic number for each element. That atomic number is the number of protons. For example, carbon has 6 protons and nitrogen has 7 protons. Those numbers are not going to change, which is why they’re used as the atomic number.

An isotope is an element that has the same number of protons, but a different number of neutrons.  So, if you have the same number of protons, but you are adding or taking away neutrons, your atomic mass is going to change, which results in elemental isotopes. The word “isotopes” just means “same” “place” in the periodic table. Carbon has three isotopes including 12C, 13C, and 14C. Nitrogen has two isotopes including 14N and 15N. The superscripts beside the element are the changes in the neutrons. All elements have forms of isotopes.

“[Stable isotopes] provide a natural way to follow and trace element cycling within the biosphere.”

Of the isotopes, some are radioactive, while others are stable. An isotope being radioactive simply means that the isotope can decay and will change neutrons until it is stable. For this project, we only worked with stable isotopes. Stable isotopes are 100% safe to humans—we actually have stable isotopes in us!  In fact, if you were to look at the hydrogen and oxygen stable isotopes of Americans across the country, you would see regional trends due to regional water sources! Think of stable isotopes as hidden messages that are within everything. They are messages written as chemical compounds and filled with information. They provide a natural way to follow and trace element cycling within the biosphere.

Stable isotopes are a relatively new analysis with sea turtles. Several studies have been done to determine their prey items, the metabolic turnover between tissues, the foraging regions of loggerheads in Japan, the foraging regions for loggerheads off the coast of North Carolina (using red blood cells and prey), and many, many other studies using red blood cells, egg yolks, albumen, epidermis punches, muscle, and carapace shell samples. In my project, I acquired the already hatched eggshells from nests during nest evaluations. Stable isotope analysis of the hatched eggshells provided a less invasive and more cost-effective method for gaining insight into the foraging areas of sea turtles compared to traditional techniques, such as satellite tracking or mark and recapture. That’s why we chose to use isotopes as the tracking technique for my research!

And yes, I know, learning about isotopes is hard.  So here are some pictures of the sea turtles I got to swim with in the Galapagos to remind you of why science is so cool! 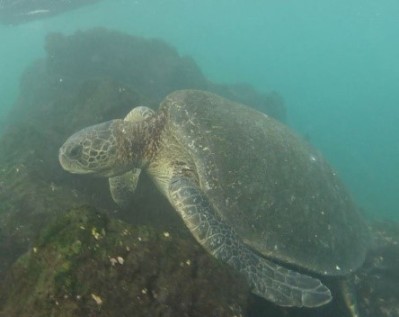