Happy New Year, NERRds! With the new year comes new intentions and goals along with reflections of the past. While we shiver from this wet, cold weather (winter? In Florida??), huddled in our offices, we are thinking about the year we just completed (and how much warmer it was).

Last year brought us new projects, like our Sentinel Site, several major hurricanes, and one more year of long-term monitoring data (whoop!). We are kicking off the new year with a guest post from a fellow GTM NERRd, Scott Eastman, where he provides a recap of our long-term sea turtle nest monitoring at the GTM this past year. He serves not only as the Stewardship Coordinator of the GTM Research Reserve, but also as the Manager of the Northeast Florida Aquatic Preserve (and is a scientific superhero, in this NERRds’ opinion).

The story of this nesting season was the impact that Hurricane Irma had on our beaches.

This year we documented a total of 196 loggerhead (Caretta caretta) nests and 17 green turtle (Chelonia mydas) nests, for a total of 213 nests documented throughout the 2017 nesting season. False crawls, or non-nesting emergences, are often good indicators for the general beach conditions. If conditions are not suitable for nesting either due to light pollution, obstacles, etc., nesting females will often return to the ocean without nesting, resulting in a false crawl. This season we documented 101 loggerhead and 6 green turtle false crawls, for a total of 107 false crawls. 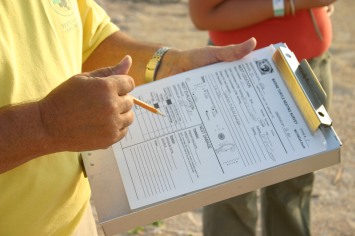 Hurricane Irma occurred late in the nesting season, thus many of the nests had already emerged prior to the storm. Before Hurricane Irma, we had documented a total of 211 nests and there were 43 nests, around 20%, still on the beaches when the Hurricane approached our coast. Surveys were initiated several days after the conditions had improved. During these surveys we were only able to locate one nest that was still on the beach, although that nest had been severely inundated and was ultimately considered a loss. To our surprise, we also had two sea turtles nest right after the storm, although these nests were unsuccessful as well.

Overall, we estimate that 20% of our nests from the 2017 nesting season were lost due to Hurricane Irma.

Scott Eastman is an Interdisciplinary Ecology MS student in the School of Natural Resources and the Environment at the University of Florida. He is a member of the University of Florida, Archie Carr Center for Sea Turtle Research, a Center of Excellence, dedicated to seeking innovative solutions for sea turtle conservation through research and education. He is also the Executive Director of Eastman Environmental, a non-profit, 501 (c)3 organization dedicated to protecting, restoring and conserving coastal and marine habitats through research, education and community involvement initiatives. Additionally, he is a contractor with The Ocean Conservancy working to identify stressors for the development of spatially-based cumulative impact score across the Gulf of Mexico for loggerhead and Kemp’s ridley sea turtle species.